Ignore pinterest.com at your GREAT peril in 2012.
With 10 million unique users, it’s grown faster than any other standalone site in history: http://journ.us/wwPvSc

Visits to Pinterest took off in the last half of 2011, according to this chart from Experian Hitwise.

“These digital, visual pinboards had almost 32 million visits in November, and traffic is about 40 times higher than six months ago, according to Experian Hitwise. Pinterest is now the No. 7 social networking site by visits, ahead of MySpace and Google+.” (source: poynter.org)

The main elements of Pinterest are the “boards” — virtual corkboards — and the “pins” you stick in them. A pin includes a photo (or video) with a caption, and can link to a source website. Each user (they call themselves “pinners”) can create several boards on different subjects, and people can choose to “follow” (as on Twitter) their favorite pinners.

Like a retweet on Twitter or a reblog on Tumblr, Pinterest users can “repin” someone else’s item to their own boards. Multiple repins enable an item to spread virally through a network.

What’s it good for?

Pinterest is all about visual expression. It’s a way to show, not just tell.

It’s also another tool to curate the Web, to gather images and ideas from many sources and put them together in a bundle that expresses a style, personality or viewpoint on a particular subject.

Here is some help from Rob Quigley at UT Austin on what it could mean to journalists/journalism. (Click on image) 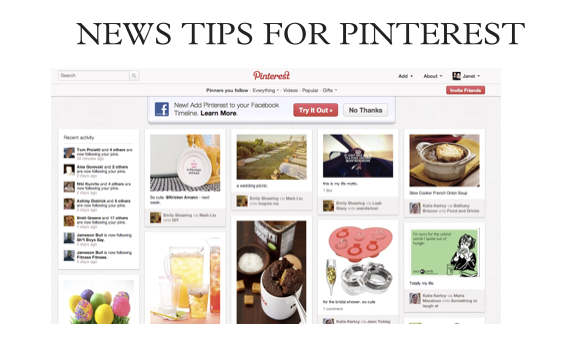