A Newsroom Battles With  a Tough Ethics Call

You don’t HAVE to read any of the links on this page but if you want to know more you can. Here are the facts of the case unfolding in at the Seattle Oregonian newspaper this week:

-the editorial page editor, a beloved man, died of a heart attack 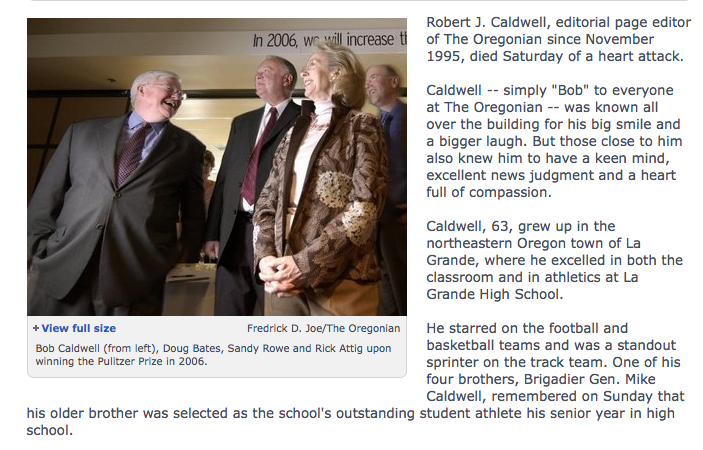 -the paper ran a piece befitting such a fine man and his service
http://www.oregonlive.com/portland/index.ssf/2012/03/robert_caldwell_editorial_page.html

-subsequently, the paper learned the editor didn’t died while in his car, he died in an apartment with a 23 year old with whom he had a running affair and provides her with money.  She says it was not buying sex but he did give her money.

Bob Caldwell, editor of The Oregonian‘s editorial pages, was in the Tigard apartment of a 23-year-old woman when he went into cardiac arrest Saturday afternoon.

The woman called 9-1-1 at 4:43 p.m. to report that Caldwell, 63, was coughing and then unresponsive after a sex act. Washington County sheriff’s officers and medical personnel responded and transported him to Providence St. Vincent Medical Center, where he later was pronounced dead.

The woman told deputies she met Caldwell about a year ago at Portland Community College. Caldwell, she said, knew she didn’t have much money, so he provided her cash for books and other things for school in exchange for sex acts at her apartment.

Caldwell had not given her money Saturday, she told deputies. They decided against pursuing prostitution charges. Deputies notified Caldwell’s family of his death Saturday evening.

-the paper felt it HAD to set the record straight even though the man had a wife and kids (Oddly enough, when Caldwell was arrested for a drinking and driving two years ago—an actual crime—his paper didn’t report the story. )

-the paper learned one of it’s staffers who provided false information about the first version of the story knew better but was trying to protect her lifelong friend and his family.  The paper fired her.

Some of the public accuse the paper of a cover-up and some say they are unnecessarily harming a man’s reputation and harming his family.

QUESTION: Is this what disclosure and transparency requires?  The only reason they are reporting the details of the affair is because the paper screwed up the original report. Why should the family suffer this indignity caused by the paper’s reporting error?

QUESTION: Why should the public know this about a man who holds no office and is not known to 99% of the population (I made that number up.)  How important is it that he was the editorial page editor, in effect the gatekeeper of standards for the paper?

QUESTION: Should they identify the woman? Why or why not?

Here is the official 1200 word explainer by the paper’s editor http://www.oregonlive.com/opinion/index.ssf/2012/03/peter_bhatia_misinformation_no.html