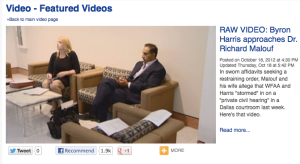 Face it, by the time WFAA’s Byron Harris is tracking you down, you have troubles. Byron is one of the most honored journalists in local television.

WFAA reported, “Dr. Richard Malouf is the founder, and still part owner, of All Smiles Dental Centers (ASDC). ASDC is one of 26 orthodontic firms whose Medicaid payments have been withheld by Texas for credible allegations of fraud.  Additionally, Malouf is accused of billing fraud in a whistleblower lawsuit filed by the Texas Attorney General.”

Harris has done lots of stories about the company that is accused of charging million of dollars for unneeded braces on children’s teeth.

But the doctor filed for and a judge granted a restraining order against WFAA over a story about a three-story waterslide in his backyard.  Remember, the doctor owes millions of dollars, WFAA reports. 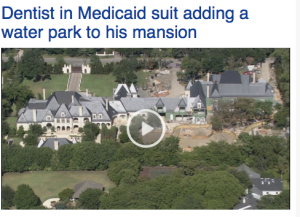 He said Harris “stormed” in on a meeting at the courthouse.

WFAA wisely posted raw video of the “storming” in which Harris asked no questions, stood back and let the meeting continue right there in the hallway of a public courthouse. A public place.

And links to previous stories.