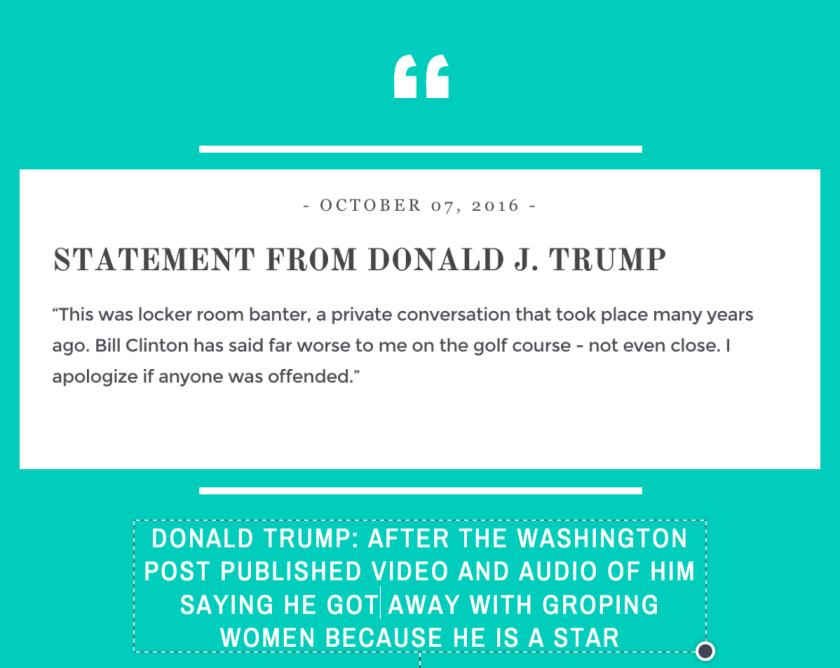 Open microphones have often left politicians and other powerful people red-faced and apologetic. But when the Washington Post published audio and video of Donald Trump explaining how he kissed and groped women pushed some newsrooms to dance around the graphic language while others took it public unedited.

Because Trump’s attitude toward women has been a central issue raised by Hillary Clinton there is a clear justification for journalists to report fully what he said, without editing his crude words. Over-the-air television reports have more concerns than cable news, online or print reporting because of the Federal Communications Commission regulation of profanity. The FCC does not regulate cable content and nobody regulates online and printed content.

Obscene content does not have protection by the First Amendment.  For content to be ruled obscene, it must meet a three-pronged test established by the Supreme Court: It must appeal to an average person’s prurient interest; depict or describe sexual conduct in a “patently offensive” way; and, taken as a whole, lack serious literary, artistic, political or scientific value.

Indecent content portrays sexual or excretory organs or activities in a way that does not meet the three-prong test for obscenity.

The FCC has said over the years that it is not interested in regulating news content and the key element in the obscenity definition is that the offensive language must not have any “literary, artistic, political or scientific value.” I think one could easily argue that a direct quote from one of the leading candidates for presidents has “political value.”

The Washington Post, which broke the story and included the graphic video edited the text:

Trump continues: “And I moved on her very heavily. In fact, I took her out furniture shopping. She wanted to get some furniture. I said, ‘I’ll show you where they have some nice furniture.’ ”

“I moved on her like a bitch, but I couldn’t get there. And she was married,” Trump says. “Then all of a sudden I see her, she’s now got the big phony tits and everything. She’s totally changed her look.”

At that point in the audio, Trump and Bush appear to notice Arianne Zucker, the actress who is waiting to escort them into the soap-opera set.

The Associated Press edited the quotes in a similar way. But The Guardian published the quotes without masking he profanity:

Republican presidential nominee Donald Trump bragged about attempting to “fuck” married women and kissing women without waiting for their consent, “like a magnet”, in a 2005 conversation with a television host that was caught on a live microphone.

During the exchange, with the television personality Billy Bush of the program “Access Hollywood,” Mr. Trump recalls how he once pursued a married woman and “moved on her like a bitch, but I couldn’t get there,” expressing regret that they did not have sex. But he brags of a special status with women: Because he was “a star,” he said, he could “grab them by the pussy” whenever he wanted.

“You can do anything,” Mr. Trump says.

—
Mr. Trump, who was 59 at the time, went on to disparage the woman, whom he did not name, saying, “I did try and fuck her. She was married,” and, “She’s now got the big phony tits and everything.”

CNN repeatedly aired the tape that the Post uncovered without bleeps, without edits. Summarizing the video, commentators used phrases like “The P word” and “The F word” but Wolf Blitzer repeatedly warned viewers of the graphic language before rolling the video. Online, CNN reported:

During the lewd conversation captured by a microphone Trump was wearing on his lapel, Trump recounts how he tried to “fuck” an unidentified married woman before bragging that he is “automatically attracted to beautiful (women)” and just starts “kissing them.” The conversation came just months after Trump married his third and current wife, Melania.
He also said: “When you’re a star, they let you do it. You can do anything … Grab them by the pussy. You can do anything.”

By late Friday, CNN was bleeping the “F” word but allowed everything else to air.

“I moved on her and I failed,” Trump says. “I’ll admit it. I did try and f— her. She was married…And I moved on her very heavily. In fact, I took her out furniture shopping. She wanted to get some furniture. I said, ‘I’ll show you where they have some nice furniture.’”

Variety, which landed an apology from Billy Bush, also edited the most objectionable words:

In their chat, Trump talks about an attempt to seduce a woman, but not succeeding at it.

“I did try and f— her. She was married,” Trump said. At the time of the “Access Hollywood” taping, By then, Trump was married to current wife Melania, but it is unclear when the incident that he was describing took place.

After Trump and Bush notice Arianne Zucker, an actress on “Days of Our Lives,” Bush makes a comment about her being “hot as s—.”

Still to come, what if anything will NBC’s reaction to Billy Bush’s involvement in this incident. Bush anchors the third hour of Today.

Leave it to the tabloids to take the story even further south. 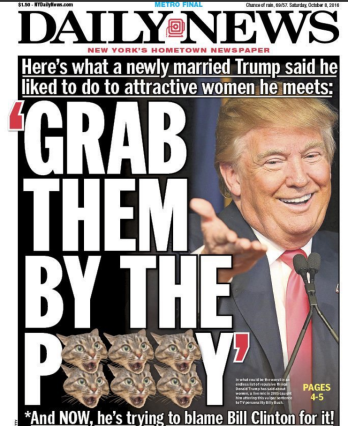 CNN’s Brian Stelter reported Friday night that Access Hollywood had been working on a story that included the video with Trump and Billy Bush and that NBC News knew about it. But both were blindsided by The Washington Post which had been supplied the video by a confidential source.

Stelter explained, “Normally these are words we would not use on the air.” But he said when it is a candidate for the President of the United States, you have to.

Stelter also said he is told there are more tapes, but didn’t say how he knows that or who might have them.

NBC News didn’t mention any of what Stelter reported and edited all of the vulgar words with beeps:

WATCH: Trump: “I don’t even wait … You can do anything. Grab [women] by the (expletive).” @KatyTurNBC reports. https://t.co/UmwRJDvqxj

Hot open mic moments have caught everyone from Ronald Reagan, George Bush, Joe Biden and President Obama saying things they wished had not gone public, but none of those moments, captured in a Time.com Top 10 list includes language anywhere near as graphic as Trump and none came close to suggesting sexually assaulting a woman.